Heed is the latest in what seems to be a never ending stream of releases this year from Ben304. He seems to be getting better with each one as well, although this latest effort does tread a fine line between being a game and a short interactive novel.

The story is a philosophical one, one of an unnamed traveller whom wishes to make more of his life. The player controls this traveller as he seeks to find his true purpose, a journey which starts with the observation of a strange fly, and learning of something called the source.

The game flows well although the story feels a little empty in my opinion. Nevertheless, each of the events that takes place during the game is intriguing enough to make you want to continue through to the game's conclusion. 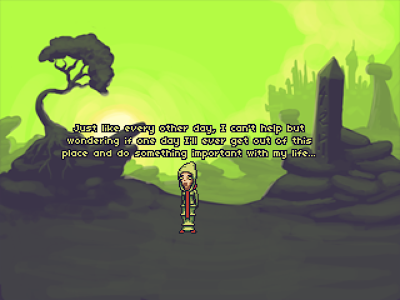 The atmosphere is further set by the fantastic choice of music. I can't really explain why it fits in so well, just that it does. 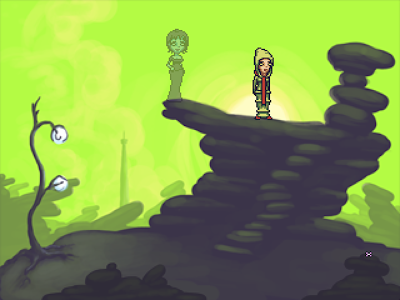 If there is an element of the game that opens it self to criticism however then the gameplay is it. The player performs an action by a simple click of the left mouse button. Whilst this is very intuitive, it doesn't allow for much in the way of problem solving. Plus, with only a limited number of hotspots in each location, it is almost always immediately obvious what needs to be done to progress.

That said, there are puzzles which seem well thought out and an attempt at something a little different from the norm. The game plays as though the developer made a big effort to make the puzzles fit seamlessly into the story which is certainly a positive. 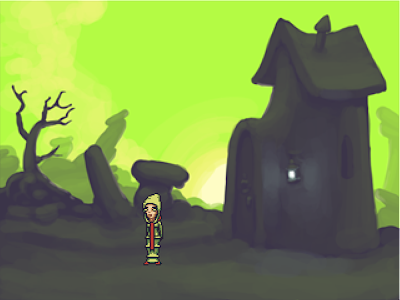 I think my main memories of Heed will be of the stylish visuals and excellent almost dreamlike atmosphere the game possesses. I think some will be put off by the lack of actual 'game' elements on offer whilst others will be delighted by the brisk pace the game keeps up throughout. The game certainly has a more experimental feel to it than many others but it's enjoyable all the same and well deserving of your attention.

Haven't been gaming too much lately however July's first review is finally here. It's of the latest MAGS winning effort, Proposal by Tijne.

In Proposal, the player controls John Gwar, a 'man' under a rather unfortunate curse. He has until midnight to become engaged knowing that failure to do so will result in him crumbling to dust. Everything is set for a night of fine dining and ultimately the proposal. Alas things do not go exactly to plan resulting in a much more tricky night than he'd planned.

The introduction to the story and main character is excellent. Going into too much detail would spoil it (as might looking too intently at the screenshots) however suffice to say it does a very good job of drawing the player into the game. The remainder of the story is also very solid for a short one location game. 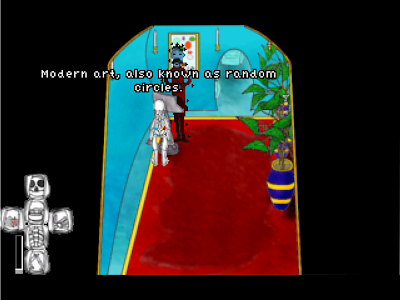 The game's atmosphere is set up very nicely by the aforementioned intro and is fairly lighthearted throughout despite the unfortunate position the main character finds himself in.
The music also very much suits this lighthearted nature of the game.

If there's anything that hampers the atmosphere at all then it's the visuals which are quite blurry at times. This is especially true of the character sprites. Whilst by no means awful, the graphics could have done with some sharpening up. 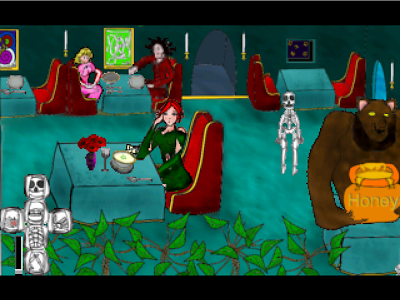 Most puzzles are of the inventory variety and these are logical enough given the nature of the game. Some require abit of lateral thinking although I never felt cheated. In fact it was these puzzles I enjoyed the most.
The GUI is indistinct and abit of an eyesore on the side of the screen however it doesn't interfere with gameplay too much. Proposal is a fun game which does a good job from the start of enticing the player to keep playing, it's paced very well and didn't once make me frustrated. The game could be improved visually and is understandably short, however it's certainly worthy of your time if you like a pleasant enjoyable story with some decent humour thrown in.
Pros
- Good humour
- Some good puzzles
- Likeable main character and story
- Well chosen music

Here's a list of the games reviewed in June.