I must start this review with an apology for reviewing two games in a row by developers who I've already reviewed games by. These people are clearly way too greedy...

Awakener is the latest experiment from the talented Ben Chandler (Ben304).

The story revolves around Fadi, a nine year old boy with a thirst for adventure. Given permission to spend the day with his Aunt Sylvia, he is handed the simple challenge of retrieving a potion from a store on the street. Of course, his task turns out to be not quite so simple.

Although the story has a nice twist at the end, until that point it's abit of a non-event. The game appears more of an excuse to allow the player to interact with some weird and wonderful characters. This would perhaps be a problem if the characters weren't particularly interesting however each has a fairly distinctive personality, even those that aren't actually characters (yes I'm looking at you Barrel). 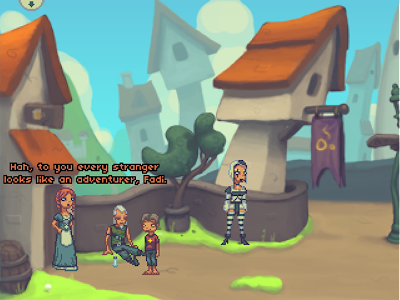 The first thing you will notice when entering the game is the beautifully drawn and colorful background (nope that shouldn't be plural - there is only one). It's style is unmistakably that of this developer and it fits perfectly to this genre of adventure. Furthermore, the character animations are excellent and often unexpected. The music also fits very well with the style of the game.

Aside from the visual and audio elements...

The game does a great job of creating a comedic atmosphere and thankfully doesn't try and force it's humour onto the player. Whilst many of the game's conversations and responses will contain an element of humour, they are done so with a degree of subtlety. This enhances the game's already chilled out atmosphere. Nothing in the game feels forced, and never did I feel rushed to do anything.

However, there are a couple of areas where the player loses immersion in the game. Firstly, the fourth wall is broken several times as Fadi humorously comments on his being in a game. Although this isn't a huge problem, I feel it could have been handled in a better way, perhaps by referring to the traits of adventure game characters as if they were real actions undertaken in his world.

For example, and I appreciate I'm getting sidetracked here but please bear with me...As Fadi is established as a keen adventurer, he could make a comment such as, "Adventuring 101 says, 'Do not under any circumstances leave your stuff lying around - you never know who might take it.' Perhaps I should suggest to the guard their that he buys himself a copy...not right now though of course." I'm not sure if this sort of thing has been done before (probably has) but is just an alternative to fourth wall breaches of this nature.

The second loss of immersion again relates to the game's dialogue. Considering he is a nine year old boy, Fadi's vocabulary seems too well developed. There are times in the game when I was left thinking he must be an English language graduate from Oxford University rather than a young kid. Of course I'm exaggerating but still, it did spoil the believability of the character a little. 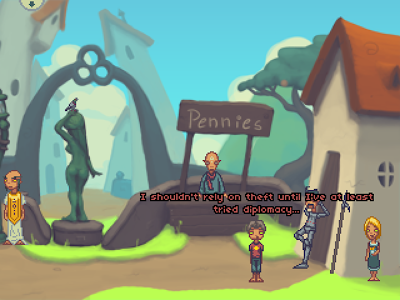 The game's puzzles are all inventory based although some require the player to talk to a character first. The solutions are simple and getting stuck for any longer than a few seconds is very unlikely.

The game handles as most (possibly all) of Ben's games do - very simply. Again, for adventure game veterans this will probably be seen as a negative. Anyone who likes to be challenged in their games will most likely be disappointed with Awakener. Having said that, the simple gameplay may suit those with little time and/or patience, as will the short length of the game.

My personal opinion is that whilst I would have preferred the game to have provided more of a challenge, I can't really see how it would have been able to do so without ruining the atmosphere of the game. More complex puzzles would likely have seemed out of place, whilst more illogical puzzles that are generally acceptable in humorous games would have made the game frustrating thus losing it's calm and laid back nature.

Therefore, I think the problems with gameplay are largely caused by the confines of creating a short comedic game, rather than by poor or lazy puzzle design. 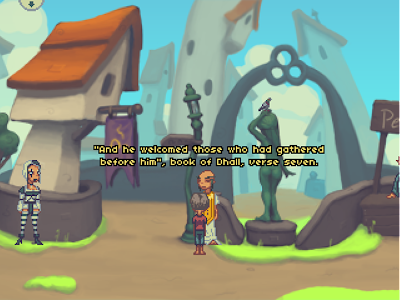 Whilst only a short diversion, Awakener is most definitely worth checking out. The subtle comedic tone and laid back nature of the game combine to really good effect and make the player happy to be spending time in it's world, even though that world only consists of one small street. The short length of the game does rather suppress the story and prevent it from being a classic, however it does once again showcase the exciting talent of the developer.

Overall, anyone in the mood for a comedic game that's not too taxing could do a lot worse than loading Awakener up.

- Short
- A couple of immersion issues