Right, well this review was actually ready a week or so ago but have only just got around to adding the screenshots.

Love and War, made by Admiral Styles, is my first review of an RPG on the blog. It is of course still a freebie, and at it's core it is way more like an adventure game than any other RPG I've played.

The reason why? Well, it is often said that great fiction is character based - this should be extended to the medium of games and it is adventure games that are viewed (at least by their fans) as the strongest and most suited genre for storytelling. Many games tell their story through bland one-dimensional characters and are arguably ineffective in immersing the player as a result. Of course their are many adventure games that fall into this trap too, however it seems that great characters are far more common in this sphere of gaming. Thus it was with surprise that I became so attached to and interested in the characters of Love and War.

The game's main protagonist is Ryan Eramond of Davenport, Terra. Fresh out of high school, he's looking forward to a study free summer spending time with his buddies. However, plain sailing it will not be. His Dad hires him to work as a delivery boy (there goes all that free time), plus he has girl problems, serious girl problems.

Although Ryan is the main man of the story, the player will also become acquainted with his two best mates, Henrik and Armin, as well as an early childhood friend, Lavie. All of these characters have their own distinct personalities and their interaction and development are without a doubt the cornerstone of this game. The stories of the main characters are thoroughly interesting and entertaining.

There is also an overriding story arc involving government unrest and the potential for war. Whilst this is fairly intriguing, it did not for the most part maintain my interest the way the more personal aspects of the story did. It is of course linked to the game's main characters but seeing how Ryan et al were going to affect the world from their viewpoint seemed far more interesting that seeing how the world was going to affect them.

It is with the world story that the game starts, briefly casting you as a couple of characters from 300years or so past. Perhaps it's just me, but I'm not a fan of this game mechanic, it doesn't hold my interest too well. It is only short however and the sole reason I mention it is to assure people that the game does become markedly more interesting thereafter. 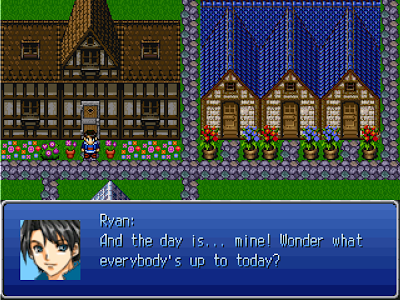 The great atmosphere of the game is also largely created by the characters. Whether they're sharing a joke or feeling sorry for themselves, they always manage to keep the player interested in the game-world. Likewise whether the atmosphere is lighthearted or serious, to me it always felt genuine. It's likely that this is also due to the quality of the game's dialogue, which is very well written and also witty when necessary. Indeed, it is often worthwhile just journeying around each town talking to residents - their conversation threads being far more interesting than is the norm in these types of game.

As Love and War was made in RPG Maker, it is no surprise the graphics are tiled. This may put some people off although it didn't bother me at all. The graphics do their job just fine - plus the close-ups that are used at certain points throughout the game are well drawn and fit in with the look of each character portrayed.

The audio side of the game is solid also with an unintrusive soundtrack that becomes familiar without being annoying. 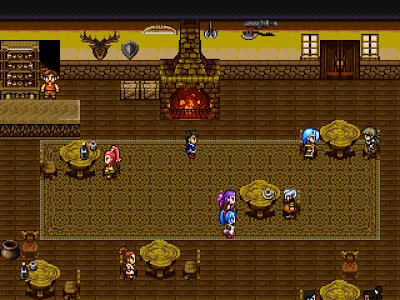 As with any RPG, there is combat, and the suitable equipping and levelling up of your characters is important if you are to progress. I don't recall ever being frustratingly stuck on any particular battle however.

Despite the regular RPG elements of stats and battles, much progression in the game comes from talking to other characters, either to spark off a new event, or to give the player some information that may help with their current quest. The game also mixes things ups with the odd riddle and mini-game which are well implemented and detract nothing from the game's pacing, perhaps because they only occur at suitable times.

Another area worth mentioning is the game length. This game is long, however as it's title suggests, Love and War: Act 1 does not tell the complete tale. It does however tell far more of it than you might expect. On a few occasions I thought the game was about to cut off only for it to continue, and when Act 1 does eventually reach it's cliffhanger climax, it feels like an entirely fair one. Another more well known indie RPG I played finished unexpectedly and all too sudden. In my opinion, this is certainly not the case with Love and War.

Finally, the game provides the player with a fair number of save-points throughout and I remember only one section (The Mine) which seemed unfair. This section aside, I don't recall having to repeat the same part over and over again in order to progress. 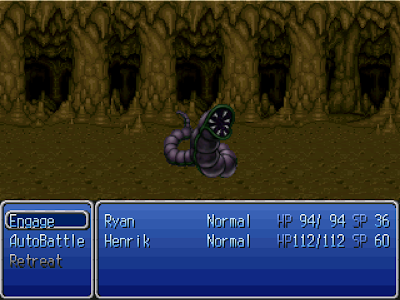 Love and War is by far the most interesting RPG I've ever played with regards to characters and story. Some people will use the graphics as an excuse not to play it, however if RPG Maker style visuals don't bother you then I can think of no reason for me to hesitate in recommending this game. I hope others for whom adventure is their primary genre are able to look past the basic RPG setup of Love and War to see the true beauty of strong characterisation and great storytelling that lie beyond it's genre confines.

I may be wrong, but a Google search suggests that this game has passed many people by. Quite simply, it shouldn't have, and in my opinion is fully deserving of your time. Bring on Act 2!