Finally I've been able to concentrate for a period of longer than two minutes and provide you, my adoring public (haha) with another review. Frasse and The Peas of Kejick is a freeware game made by Rikard Peterson.

From the start, the player takes control of Frasse, a fuzzy blue monster. I'm sure if I was so inclined the adjective I would use to describe him would be 'adorable'. After a short while you'll also be controlling his friend Gurra, a less fuzzy and apparently smarter monster with no arms and what must be magic eyebrows. The story itself is that of Frasse and Gurra's attempt to obtain the Peas of Kejick and return them to the King. Whilst the story is by no means extraordinary, it is more than suitable for this type of game and even has some twists and turns along the way

My first impression upon entering the game wasn't great however. There is no introductory sequence which means the player is thrust into the story without any pointers as to what to do. Although it's not long before you discover your main task, a short introduction would have made for a more coherent start to the game. 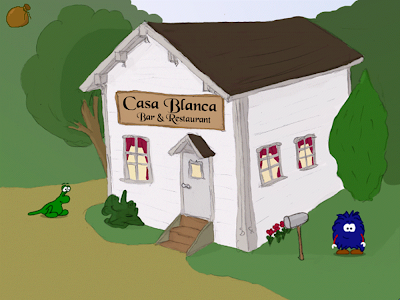 Although the player must verbally interact with other characters throughout the game, dialog is kept to a minimum. Conversations are never drawn out and short answers are the order of the day, thus meaning the developer had to solely rely on other methods to set the atmosphere of the game.

And he did so brilliantly. Where this game comes across as vibrant and fun, it would have been easy for another game attempting the same thing to end up dull and uninteresting. The brightly coloured visuals help a lot in this respect. The backgrounds are nice to look at whilst the character sprites, Frasse in particular, are also very well done. Although some scenes look like a little less time was spent on them than others, the game really does excel visually.

The game's atmosphere is added to by the great musical score. The tunes are varied and always suitable for the scene they accompany.

I would describe the game as fun rather than funny, although it does have a moment or two which might force more than a smile. 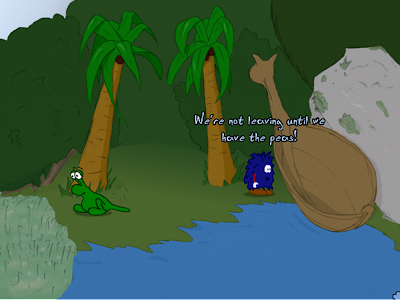 This is the area of the game that really took me by surprise. I was expecting the puzzles to be standard inventory fair. I was also expecting them to be pretty easy. Turns out I was wrong on both counts.

Although there are some simple inventory puzzles, many require the player to use the individual talents of the two lead characters in order to progress. Frasse is able to carry items although isn't so skilled in the conversation department. Gurra on the other hand is able to garner more information through conversation however can't hold any items because of his lack of arms. He also has a rather useful kicking ability.

It is clear that a lot of time and effort has been put into the development of puzzles which are both different and fun to solve. I had to consult the walkthrough on one occasion when a logic puzzle had me well and truly stumped. I was impressed to find out however that there is actually an alternative solution for those who either can't or don't wish to work out the answer for themselves.

There are also optional actions which the player can perform, some which serve no purpose to the story, others which may affect the story in a very slight way. This added interaction is a nice touch, particularly for children who may on occasion get bored of trying to solve the game's puzzles. 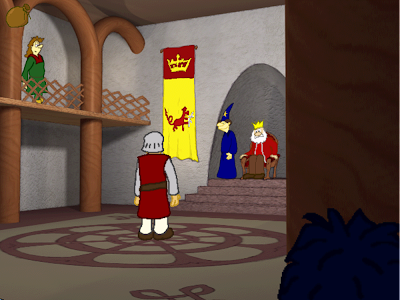 Frasse and the Peas of Kejick took me by surprise, eclipsing pretty much all my expectations. Yes the game has nice cutesy graphics, but it also has clever (and sometimes hard) puzzles.

The game also has that rare quality that makes it enjoyable for a wide age range. I'm a 21 year old guy and I really enjoyed playing, however I think it would also be a great game for parents to play through with younger children.

So, if you're looking for a deeply involving story then this isn't it, if however you're after a bright fun game then you'll be charmed and surprised by this one I'm sure.