Right, so I decided to give the Reality-On-the-Norm (RON) games a try. For those who don't know, RON is an AGS community project. Anyone can make their own game in the series however only those that fit into and affect the overall story timeline and abide by the community rules are added into the list of canon (crucial) games. Games that are set in the RON universe without affecting the overall story are put into the stand-alone list whilst those that have discrepancies in character/location details are put into the non-canon list. Got that? To be honest I'm not even sure it's 100% accurate but hopefully someone will correct me if not!

Anyway, at the point of writing this I have reached the end of number 5 in the list of canon games and it is this one that is currently my favourite. Made by Dave Gilbert, The Repossessor is getting on abit although I would have guessed it was newer had I not known it's age. (Edit: Have been informed that this is because the game was recompiled last year to work on modern machines and take advantage of improved graphics.)

In The Repossessor, you control the Grim Reaper himself. The resurrection of Michael Gower (as a zombie) will not be tolerated by 'The Powers That Be', thus you must find him and reclaim his soul.

Now, people who haven't played any RON games will probably want to know whether this game is playable without having played the four earlier titles. Well, I would say yes, although you'll miss out on some in-game references. That said, you'll most likely still find the characters funny, particularly the zombie and chicken.

Nevertheless, as the game does refer to events from previous games, if possible I would recommend playing or watching a playthrough of the earlier games.

The fourth game in the series wouldn't work for me either but not having played (or watched) it didn't affect my enjoyment of The Repossessor.

Gameplay length is short and will be unlikely to require more than one sitting. The story doesn't feel rushed however perhaps because of it's simplicity. The Repossessor is all about the characters really although the ending is great! 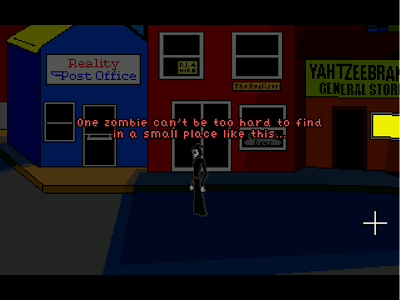 I thought the humorous and oddball nature of the RON town was represented very well, largely due to the aforementioned characters and their interesting personalities.

The backgrounds are a mixed bag, whilst some are great, others are merely average None of the backgrounds are poor though and overall they are the best I've seen from the RON games in my short time playing them. The character models and animation are also for the most part very nicely done. In particular I liked how Death's fingers move whilst he/it walks and talks. For me, little touches like that are well worth the extra time and effort required. Then again, perhaps I'm a freak...

The music isn't original however it fits nicely into the game and for me the tunes never get boring or repetitive. 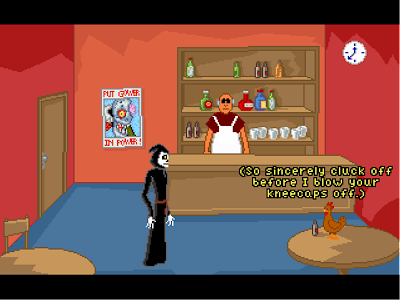 Puzzles are of the inventory and dialogue variety. They're not tough, and shouldn't pose any problems, especially as there isn't a large number of locations to visit. Perhaps locating relevant hotspots may prove the toughest challenge - one location for example appears pointless without careful examination of a mundane part of the scenery. Certainly not a major problem though.

One area that did bug me slightly is that some objects that really stand out on the background provoke no response when looking at them etc. Again, not a major problem but something that reduces the quality of the gameplay just a little.

Finally, a special mention must go to the fast walking speed of the main character. This made moving between locations far less of a chore than it can be in many games. Plus, the animation doesn't suffer as a result as is sometimes the case when this is attempted. 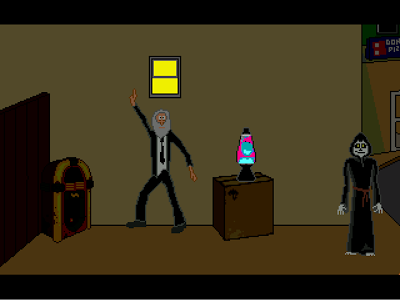 When delving into the RON universe I was sceptical as to whether the games would be worth playing. So far they have been and The Repossessor is the best of those I've experienced thus far. It's funny, has some great characters, and provides excellent continuity with those that went before it. Whilst getting the full enjoyment out of this game will most likely require knowledge of the previous RoN titles, playing it as a stand-alone game should definitely still provide its fair share of fun throughout it's short duration.

Cons
- Some stand-out background objects not clickable
- Shame it's short

Reality-on-The-Norm: The Repossessor (Be careful as walkthru is on the same page!)
Posted by JD at 15:55